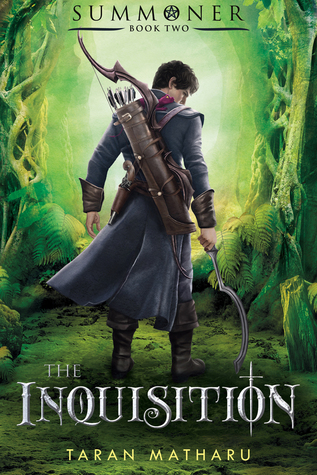 A year has passed since the Tournament.

Fletcher and Ignatius have been locked away in Pelt’s dungeons, but now they must face a trial at the hands of the Inquisition, a powerful institution controlled by those who would delight in Fletcher’s downfall.

The trial is haunted by ghosts from the past with shocking revelations about Fletcher’s origins, but he has little time to dwell on them; the graduating students of Vocans are to be sent deep into the orc jungles to complete a dangerous mission for the king and his council. If they fail, the orcish armies will rise to power beyond anything the Empire has ever seen.

With loyal friends Othello and Sylva by his side, Fletcher must battle his way to the heart of Orcdom and save Hominum from destruction…or die trying.

I was so excited to start The Inquisition after the cliffhanger ending of The Novice! This book picked up exactly one year after the events of The Novice. Fletcher has spent the last year wasting away in jail in fear of what will happen to him.  Fletcher soon finds himself on trial facing those who want him dead. I absolutely loved the trial portion of The Inquisition. It’s probably because I love to watch Law & Order, but I was enthralled by the procedural aspects and listening to Arcturus defend Fletcher. The trial was also great because we get to discover Fletcher’s birth history and who his family was. I am keeping this review spoiler free so I will not go into details, but I thought it was a great reveal and woven excellently into the trial. I love watching Fletcher grow and develop. He is discovering himself and finding his way with us along for the ride.

The next part of the book is my favorite visual of the series so far. Fletcher travels to the Elvish land in the great forest. Taran Matharu did an excellent job writing this gorgeous setting. It shows how talented Matharu is. The world he has created in this series is amazing. I could visualize it perfectly in my head. It was absolutely beautiful and I am hoping that we get to spend more time there in future books.

My favorite part of The Inquisition (and really the whole Summoner series) is the demons. We are introduced to more species of demons and they are even cooler than the ones we’ve already met. Matharu does a brilliant job describing the demons so that I can picture them as I’m reading. The demon classification guide at the end is also so cool. We are also introduced to the other species that live in Fletcher’s world…orcs, gremlins, and goblins. I really enjoyed learning about these species (especially the gremlins), their culture, and their history. It was thrilling and so scary to enter the orc territory with Fletcher and his team. I was sitting on the edge of my seat waiting to see what would happen.

Whenever I’m reading fantasy, I always ask myself if I would want to live in the book’s world. I definitely want to live in Fletcher’s world so that I can be a summoner! Although, I’d be terrified to fight in the war against the orcs!!

I do have a small criticism for The Inquisition (which is why I deducted one star). It started off very strong and pulled me in immediately, but the middle was slow. I did like reading it and meeting a couple new characters, but it wasn’t as good as the first and last parts. I understand that Fletcher’s mission had to be set up and this middle part was necessary to the story, but it seemed to drag a bit.  HOWEVER, when the story picked up again it did not hold back!! The action was non-stop! I couldn’t put it down! And that ending!?! Are you kidding!? So many twists!! I am so excited to see what happens next. Matharu has a gift (or a curse depending on how you look at it) of delivering great cliffhangers!