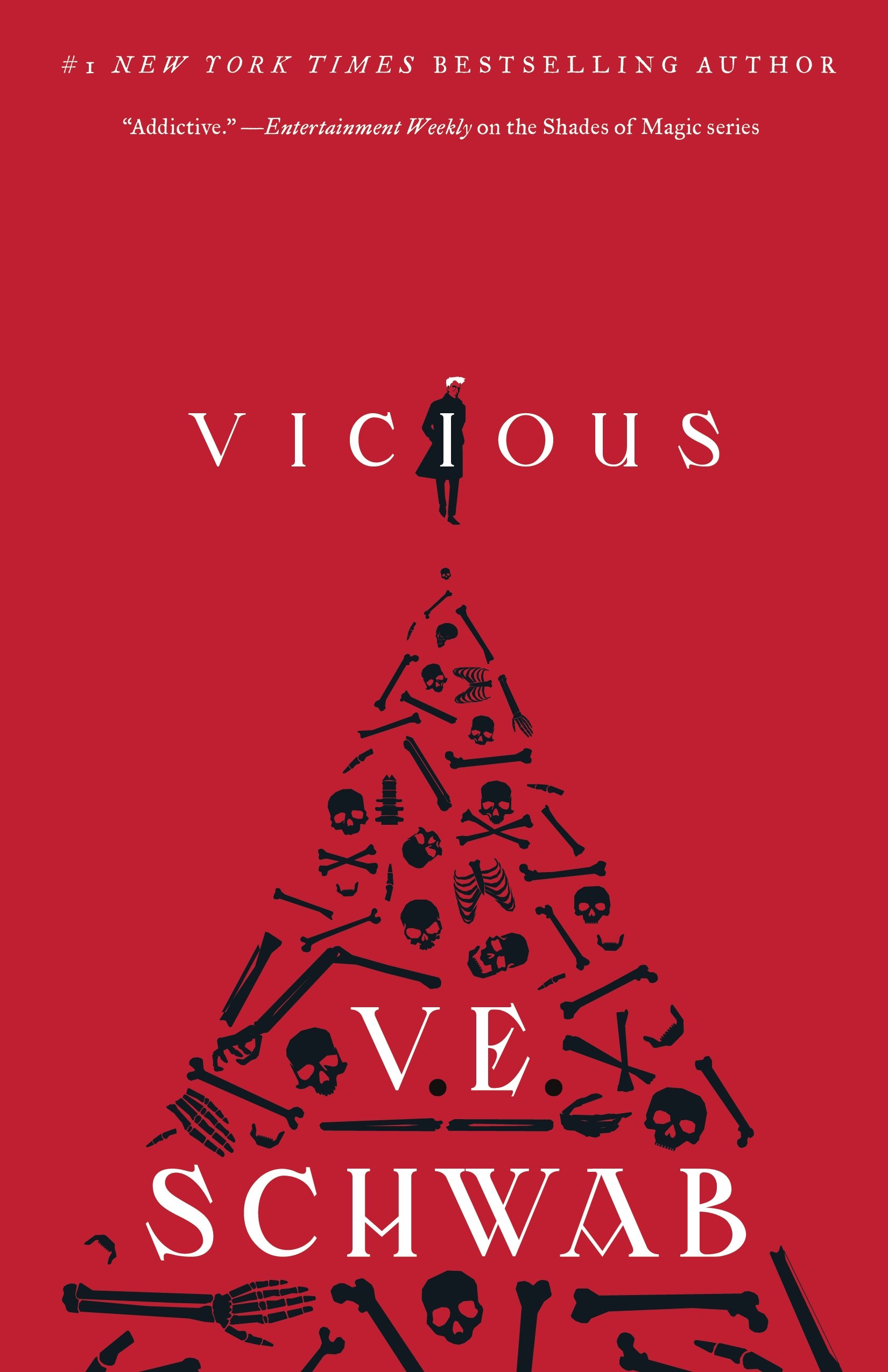 Victor and Eli started out as college roommates―brilliant, arrogant, lonely boys who recognized the same sharpness and ambition in each other. In their senior year, a shared research interest in adrenaline, near-death experiences, and seemingly supernatural events reveals an intriguing possibility: that under the right conditions, someone could develop extraordinary abilities. But when their thesis moves from the academic to the experimental, things go horribly wrong.

Ten years later, Victor breaks out of prison, determined to catch up to his old friend (now foe), aided by a young girl whose reserved nature obscures a stunning ability. Meanwhile, Eli is on a mission to eradicate every other super-powered person that he can find―aside from his sidekick, an enigmatic woman with an unbreakable will. Armed with terrible power on both sides, driven by the memory of betrayal and loss, the archnemeses have set a course for revenge―but who will be left alive at the end?

In Vicious, V. E. Schwab brings to life a gritty comic-book-style world in vivid prose: a world where gaining superpowers doesn’t automatically lead to heroism, and a time when allegiances are called into question.

Victoria Schwab is an ExtraOrdinary and her power is storytelling.

I don’t know why it took me so long to discover Vicious. I am a big fan of Victoria Schwab. I absolutely loved the Shades of Magic series. I first heard about Vicious because of all the hype for the upcoming release of Vengeful. I looked into the series and I instantly knew I had to read Vicious. I am so glad that I did! I didn’t know much going into Vicious besides that it was about extraordinary abilities and revenge. Vicious was that and so much more! It was as addictive and suspenseful as everyone said!

Vicious is a story about power, revenge, friendship, and what it means to be a hero or a villain. The story focuses on Victor and Eli, who were once college roommates. (Quick sidebar. . . the cafeteria at their college sounds amazing.) Eli and Victor were fascinated by ExtraOrdinary people (or EOs), aka people who have powers. The two research and discover that EOs develop their powers after a near death experience. They decide to put their research to the test. Eli is the first to be successful and he instantly changes. Victor is jealous and doesn’t want to be a sidekick, so he tries again and is successful at becoming an EO. Eli’s power is healing/regenerating flesh and Victor’s power is the ability to take or give pain. Through a series of events, Eli and Victor become enemies. The once friends are set on two very different paths. Eli’s mission is to rid the world of all EOs because they are unnatural and against God. Victor’s mission is to bring down Eli.

The story is told using a lot of flashbacks. This was one of my favorite parts of Vicious. The timeline was fascinating and it was a perfect way to learn about the characters histories. The flashbacks range from ten years ago to one year ago to the last couple days. I’ve read a lot of books that use flashbacks to tell the story, but usually it’s just one time period. I actually really liked that the flashbacks ranged in time.

One of the major themes of Vicious is good vs. evil and what is truly right or wrong. Victor and Eli are both antagonists. Neither one is the “good” guy. To me Eli is a clear cut bad guy. Eli is a fanatic and super messed up. He believes that EOs are not the people they were before they died. . .they are shadows of their former selves. He thinks that EOs no longer have a soul and that something is missing after their experience with death. The kicker is that Eli is an EO himself, but he believes he is the exception. He believes that God wants him to kill the EOs. It was incredibly frustrating to read Eli’s point of view. He truly believes what he’s doing is right and necessary. I understand that he is most definitely mentally ill. I just really hated his character. He was so self-righteous and entitled. Schwab did a spectacular job of creating a character to hate.

Now, as for Victor. . . he is definitely an anti-hero. I was rooting for him the whole book, but I do not deny that he is not a good person. Victor’s whole life is focused on revenge. He wants to destroy Eli and he doesn’t care what or who gets in the way. Victor’s power is very interesting because it can be used for good or evil. For example, Victor takes Sydney’s pain away which is a good act, but he also uses pain to torture one of the detectives. Victor has traits of both good and evil. This brings me back to the theme of what is means to be good or evil. What makes someone a hero or a villain? While I think that Eli is a clear cut villain, I can see the argument that his mental illness is the reason for his evil acts. Therefore, is he really a villain or just someone who is very sick? Victor is definitely a hero and a villain. He is a hero when he saves Sydney and takes her in, but he is a villain when he makes her revive the detective just to kill him again. Victor is a very complex character. I think that this is Schwab’s point. Good and evil is not black and white. There is always a gray area. Despite doing some very terrible things, I liked rooting for Victor.

A couple of side notes about the other characters. Serena was terrifying! I kept thinking about her power and its ramifications. She could literally control the world! Mitch was like a giant teddy bear. I loved how much he cared about Sydney. As for Sydney, I think she’s the only truly good person in the story. She’s been through a lot of trauma and just wants to feel safe. I hope that Victor doesn’t ruin her goodness.

I absolutely loved the ending of Vicious! I especially liked how the story started and ended in a graveyard. It came full circle! Vicious ends on a cliffhanger, but it could be read as a standalone. You don’t have to read the sequel. However, I am super excited to see where Schwab takes the story in Vengeful!